Over the last months we build the HR Assistant for the ICS World Wide Development Competition.

The backend of the code is totally written in Java. The XPages and custom controls only serves the data to the browser, nothing more.

We have all the Java classes in the application as Java Design Elements, which give you, like any other Domino Designer Element, an metadata file. I noticed that the runtime is mirroring the java files to a java directory under the WebContent –> WEB-INF, which went sometimes gone wrong in 8.5.x

This metadata files was causing the most annoying conflicts when using GIT during the development, as we developed everything on our local machine and the GIT repository the linking factor.

Today I was looking about moving the Java files to the correct location. For the development we had a debug application with a subset of the classes to test the connectivity with Cloudant.

So I found it a good candidate to do the move first.

Note: below everything happens in the Package Explorer ( found under Menu bar –> Window –> Show Eclipse Views

Step 1: Create in the NSF under WebContent –> WEB-INF a folder, called ‘java’ 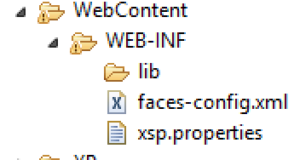 And make it as source folder, by right clicking on the folder

Locate the Code/Java folder, keep in mind it is not under Code as displayed in the Applications view 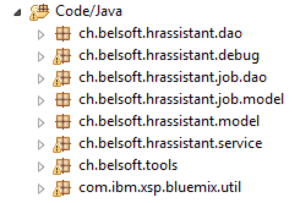 And copy and paste them in the new source folder 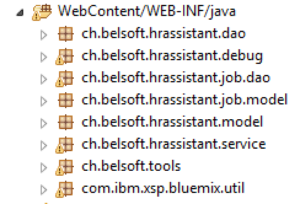 Remove the files under Code/Java.

Build the application and everything should work as before the move.

A big benefit it is there is much less metadata files which can causing conflicts when using Source Control. Another benefit is that you remove the tight integration of the Domino Designer and you can also move the Java files to a OSGi plugin to make it more flexible.